Mr. Tuffles Will See You Now

The #redditwriters group has held several write-ins on their slack channel now, and I’ve been in a few of them. The format is usually something like a 5 minute warm-up, a 20 minute prompt, then a 30 minute prompt. Prompts can be anything: a word, a phrase, an image, a sound, whatever. Following the prompts is optional. Last night I had a fun run with an image prompt from Lila Vasudevan and thought I’d share– see below. [I edited a bit since the write-in].

And by the way, ye writers of reddit, these write-ins are fun, useful, and creativity-inducing. If you’ve got the time, I suggest giving one a shot. 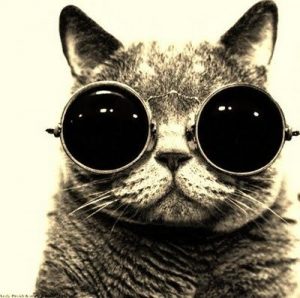 Mr. Tuffles Will See You Now

“Come in,” the voice called. Eric pushed the door open to a room of shiny wood and a desk the size of a minivan, and at the desk sat a cat wearing a pressed white shirt, bright blue tie, and thick, dark glasses. He blinked. Yes, it was a cat. Gray, with sandy stripes on his neck.

“Yes, here, please have a seat,” said the cat, pointing at a chair in front of the desk.

Eric sat, but kept looking around as if hunting for a hidden camera. “Um. I just wanted to talk to someone about a loan.”

The cat flumfed back in his chair. “Yes, that’s why they’ve sent you to me; I’m your New Accounts Representative. Your name is Eric…Post? My name is Mr. Tuffles. Nice to meet you.” He held out a paw, and after an awkward moment, Eric took it gingerly and shook it. Mr. Tuffles wasn’t declawed. Eric felt the soft, velvet pads on Mr. Tuffles’ paw, and ran his fingers over them the way his own cat, Mittens, liked.

“Er…is everything all right?” Mr. Tuffles looked at him over the glasses, and Eric let go of the paw.

“That’s fine, Mr. Post, I understand.” The cat nonchalantly licked his paw. “So, what can we help you with today? We have a number of financial assistance products available. Are you having some work done on your home?” He brought out a letter box with several brochures, but when Eric reached out to take them, the cat stared at his outsretched hand and moaned.

Eric pulled his hand back. “Mr. Tuffles…? Sir?” The cat’s moaning grew louder. “Mr. Tuffles, are you all right?”

Mr. Tuffles leaned behind the desk, reached for a small waste basket, and threw up in it. Twice. Then he licked the back of his paw and combed his cheek-fur back into place. “Excuse me. I suffer from the occasional…”

Mr. Tuffles frowned. He looked into the center drawer of his desk and made sure the DENIED stamp was handy. “I have an ulcer, actually. I take meds, but they don’t always…”

“I’m so sorry, that a was very insensitive comment. I apologize.” The cat stared intently at the space next to Eric. Almost as if there were something– or someone– next to him. “Um…Mr. Tuffles?”

The cat patted the brochures. “No worries, Mr. Post. Now, did you say you were interested in a home improvement loan…?”

They talked over the details and ran the numbers. Five thousand dollars at eight percent. Maybe not the best deal out there, but it was fast and it was hassle-free. As Eric filled out and signed the forms, he saw Mr. Tuffles’ paw stretch out toward the top of his pen and pull back, fighting the urge to bat at it. They came to the last page and Eric signed in the last spot. Mr. Tuffles took the papers and evened them up.

“So, I’ll take these back and get these officially signed, and you’ll be all set.”

Mr. Tuffles looked at Eric over the glasses again. “Mr. Post, I’m not certain what you’re–”

Eric dumped the brochures from the letter box onto Mr. Tuffles’ desk and placed the box, open side up, on the floor. He folded his arms and waited.

Mr. Tuffles fluffed his ears, then growled. “Mr. Post, I resent…” Then he got up, stepped into the box, and sat down. The box crushed under his haunches.

“I’m sorry, Mr. Tuffles, but this is a very unusual situation and it’s been driving me–”

The cat sat up straight in the mostly-flattened box. “Mr. Post, this mockery is objectionable and completely inappropriate. I will have to ask you to leave.”

Eric sighed. “About that loan…would it do any good if I apologized again?”

Mr. Tuffles ignored the question. He licked the back of his paw and began grooming his ears. The message was clear: I said good day, sir.

Eric stood up and held out his hand for a farewell shake. But just as Mr. Tuffles reached out his paw, Eric reached up and scratched the New Accounts Representative’s ears and neck instead. Mr. Tuffles froze, and his ears went back in shock, but almost immediately swung forward again. He stretched his neck into the scratching hand. And he began to purr. His eyes closed halfway, and he purred louder.

Still purring, the cat watched Eric with green lamplit eyes as he walked to the door. When he touched the knob, Mr. Tuffles said softly, “Mr. Post…let me go get your loan signed. I’ll be back in just a moment.” It was all so embarrassing, but damn, a good neck scratching was hard to come by these days.

Eric wondered what Mittens would think when he smelled another cat on his fingers.