master of the book tour 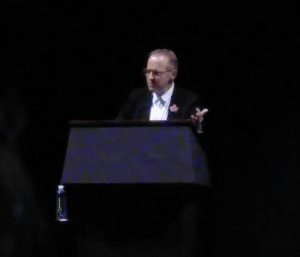 David Sedaris at the podium

I went to see David Sedaris on his 2018 book tour stop in Indy tonight. I went by myself; his humor isn’t Liza’s cup of tea.

I paid more attention to the mechanics of it all this time, and it’s interesting. He never lets a story go for longer than 30 seconds without a joke, a reference, or a point that keeps the audience’s attention. His timing is impeccable, his delivery practiced and polished.

And he knows how to bring the funny. The stories tonight: the saga of a cracked tooth and the doctors in different countries that couldn’t find anything wrong with it, and the one who finally did; a detailing of the world’s worst, most vulgar curses (which I won’t spoil here, but the entire story was delightfully objectionable), and several excerpts from his second diary collection. He also gave a thorough plug for a new story collection from an author he likes, Ottessa Moshfegh’s “Homesick for Another World”, which, as he put it, was “wonderfully weird.” To close out the show, he held a Q&A for about 20 minutes.

An influence and inspiration for my own work in progress, absolutely. I’m quite sure I won’t measure up to this Master of the Book Tour. But let the practicing begin–it’s a hell of a yardstick, and a hell of a goal to shoot for.